New Website Draft and a Shout Out to Robert Linkiewicz 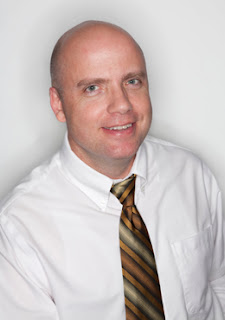 This post is two things:
1) a "What's UP!" to my man Robert Linkiewicz in the Columbia College 10th floor darkroom
2) a preview of the new version of my website that I've been working on the past two weeks (shout out to my man Ian Whitmore)

Last week I called up Robert asking for lighting advice for my classrooms at Keene State. The two of us go way back and he was always one of my favorite people at Columbia. Robert's a huge music buff (as am I) and we have spent hours upon hours talking about music, parenthood, movies and generally just laughing. When I called him last week, he scolded me for not updating my blog often enough (fair enough). So Robert, this one goes out to you!

Now, as I mentioned above I have been busy the past two weeks completely re-working my website. I like the old template but upcoming projects have made it so that I needed a re-design (plus it was time).

A Beta version of my new site can be viewed here:
http://jonathangitelsonthegit.virb.com/

I would appreciate any and all feedback before this goes live, I'm still making some minor tweeks and could use the feedback.
Posted by jonathan Gitelson at 1:01 PM 5 comments:

A funny thing happened when I became a father back in 2008: I began to find myself constantly counting. It started with my son's bedtime. Each night when I thought he had finally nodded out, I would count to 100 mississippi for insurance, just to make sure it was safe to start my tiptoed retreat out his bedroom door. Being a neurotic individual, I somehow convinced myself that anything short of 100 mississippi would wake him up and prolong our bedtime routine.

Eventually, I started to become curious about how I could measure other things in my life by counting to 100 mississippi. How far could I walk? How many steps could I climb? How much snow could I displace using my landlord's snowblower?

This video was made in the midst of one of our many large snowstorms this winter. This is the first film of a series, it will be paired with photographs and diagrams. Here are some of the photographs made that day. They somehow got majorly screwed up but I kind of like the result.

Posted by jonathan Gitelson at 8:58 AM 2 comments: 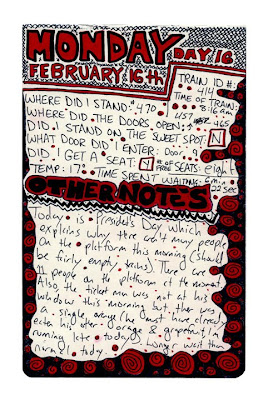 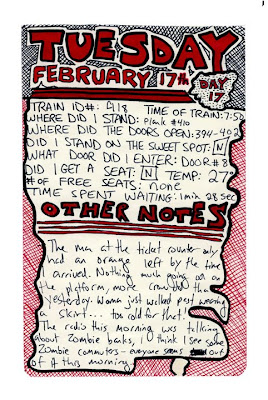 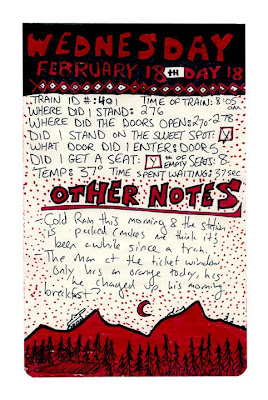 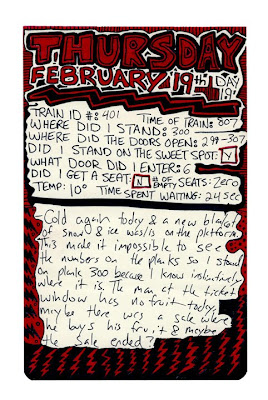 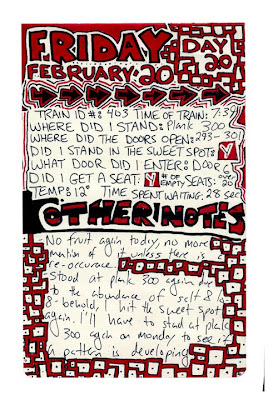 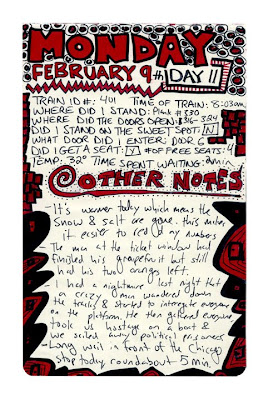 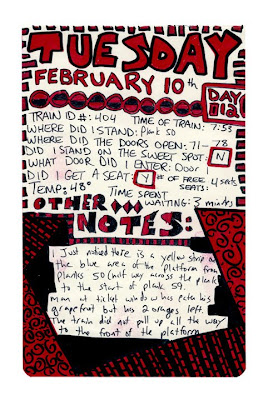 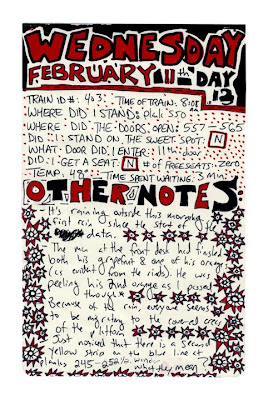 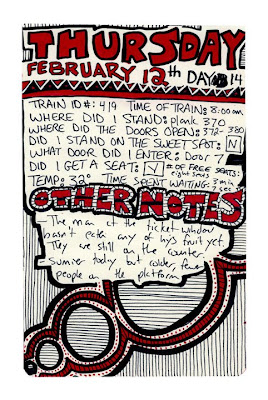 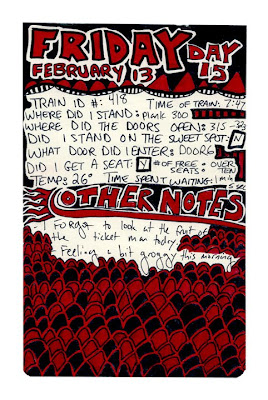 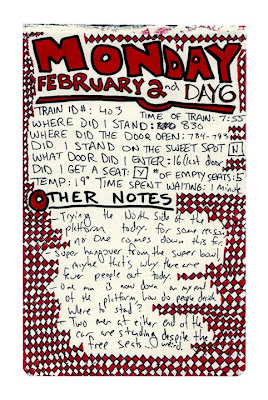 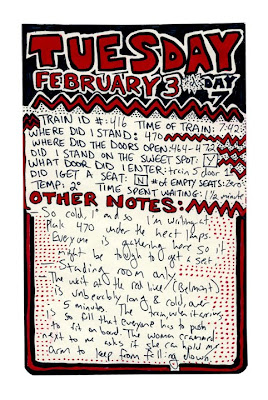 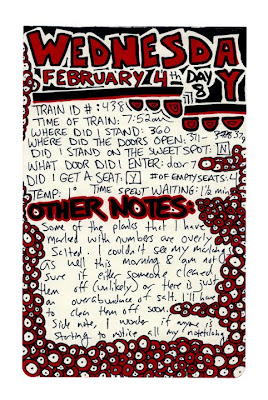 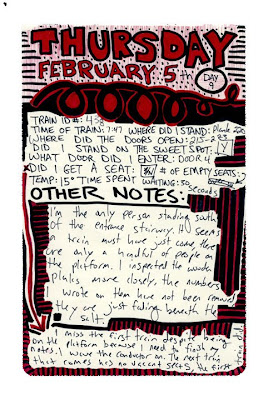 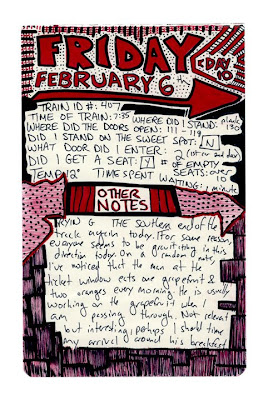 Posted by jonathan Gitelson at 6:54 AM No comments:

Work In Progress (The Sweet Spot) 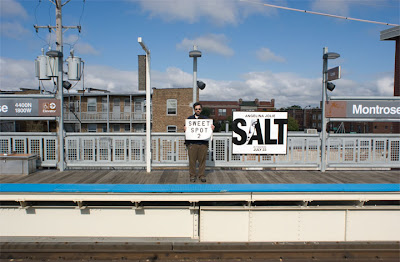 It has been a very long time since I've posted here, life has been upside down with a big move and a new job. As the dust is beginning to settle, I'm starting to get back to making art. Number one on my list is to complete my piece "The Sweet Spot," a project that began in Chicago and will be completed in Vermont. It is a result of a fifty day study to determine the ideal place to stand on the Montrose Brown Line platform (in Chicago) to get a seat on the train during the morning commute. This project will be shown next Autumn and so I'm suddenly feeling a lot of pressure (which is good) to nail it out.

During the fifty days that I collected my data, I made detailed notes to organize my findings. These will be part of the final piece (probably hung in a grid) and present my findings as well as miscellaneous doodles. 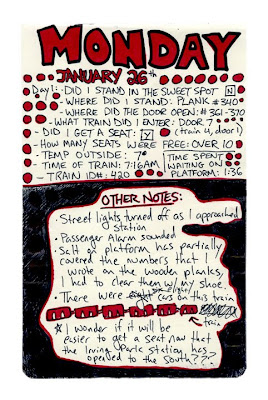 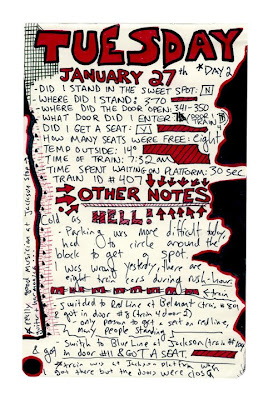 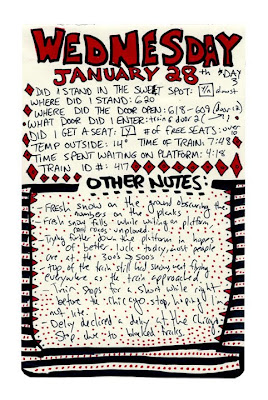 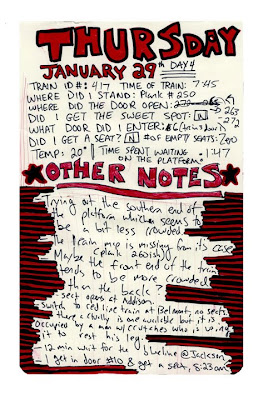 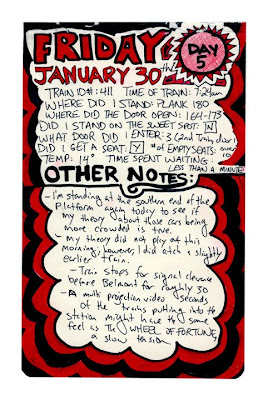 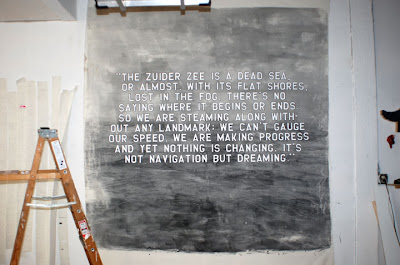 Well it has been a week of pretty intense studio work but I have completed the paint stencil letters for my piece for Amsterdam. We are heading out of town for the weekend but the last task when I get back is to stencil "-Albert Camus" at the bottom of the text block. I have another 8' x 8' print and will be slicing it in half and hanging the two 8' x 4' strips on either side of this piece at an angle to create depth. This is a sketch of what the installation will look like: 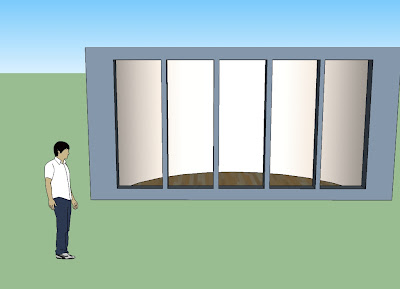 More posts on this piece to follow in the coming weeks.

Posted by jonathan Gitelson at 8:22 AM No comments:

Archie Is The Best Thing Ever! 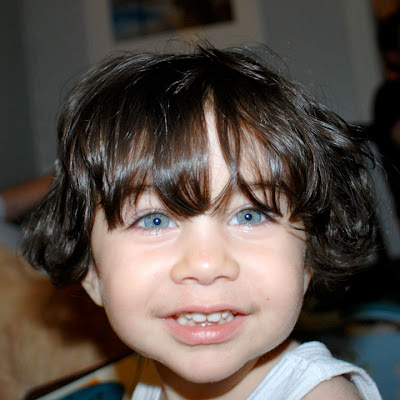 Needless to be said, Archie is the best thing ever! He has recently become obsessed with building blocks and it is so much fun as a father watching his little brain at work. The other night I came out of my office and found his latest city perched atop our living room table: 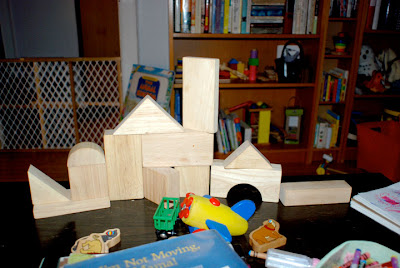 I was an avid builder as well when I was a kid, here is a glimpse of my young brain at work: 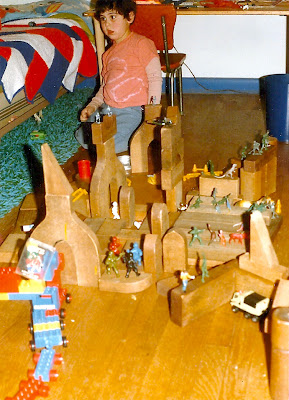 My dream is that as Archie gets older, I'll have an area of my studio partitioned of for his wild creations. Here is a video that Robin created of Archie hard at work: