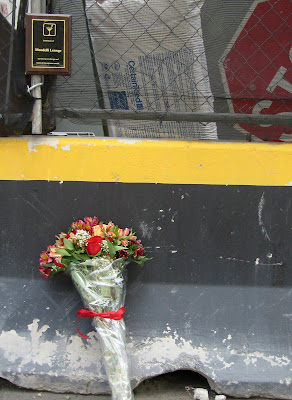 I haven’t always been “anti-condo”. We adored living in the old building on 14th and Michigan, which was once the first private hospital in Chicago, even though it sometimes felt like living in a museum. The condo board protected the original marble floors and 16' tall windows to annoying excess. Moving furniture in and out required a permit, a lecture on conservation, and hefty fee. We’d often have to maneuver, with arms full of groceries, around groups of architectural tourists to get into the building. But doing these things felt right. It was the price we paid for the privilege of living in a bit of history.

Unfortunately though, less than six months after we moved to 14th and Michigan, the earth-shaking rumble of pile drivers started waking us up every morning. In 2005, the city of Chicago limited the number of allowed condo conversions in existing buildings, so developers started leveling entire blocks of the South Loop. Glorious, old buildings on all sides of us were being destroyed, and it felt like a personal attack. When you live in a city, your neighborhood is as much a part of your home as the furniture inside your four walls.

Sadly, it turns out that Chicago has a long history of destroying its architectural history. In 1972, Richard Nickel, an architectural photographer, died while hurrying to photograph historic Chicago buildings before they were demolished. He was in Louis Sullivan's Stock Exchange building when the ceiling came crashing down on him and his camera. An article published in the New York Times a few years ago called Chicago a “battleground” in the “preservation-versus-development debate,” and unfortunately the stalled economy isn’t slowing the destruction down. This past year, the eleven downtown blocks of Michigan Avenue were placed on The National Trust for Historic Preservation’s 2008 List of Most Endangered Historic Places.

This is all very sad, but I can honestly, and perhaps embarrassingly, say that it didn’t hit home to me until one afternoon when I needed a drink. I headed straight for Mondelli’s, my favorite bar, only to find a crane swinging a wrecking ball into the building. I cried right there on the corner of Oak and State. It truly broke my heart.

Mondelli’s was rumored to be the smallest bar in Chicago, but what it lacked in size it made up for in character. Old Chicago gangster photos lined the walls and busboys shuttled hot and delicious pastas in from the old-school Italian restaurant next door. The raspy-voiced bartenders ditched the typical mini-skirt and boob-revealing uniform and wore sweatpants, 80’s mom jeans, or whatever they felt like wearing. They made a killer drink called the “espresso martini,” and playing the widest variety of good music you could imagine.

Because it was such a small bar, you would eventually end up talking with the folks around you. My favorite regular parked his Harley on the sidewalk right next to the front door and always wore a black leather vest that read “National Hair Piece Designing Champion” across the back, and he wasn’t some poser hipster. He actually was a Harley-riding National Hair Piece Designing Champion.

I’m not quite sure how such colorful individuals managed to find this place in a neighborhood filled with uppity boutiques and trendy night-clubs. It was our own little misfit island, and that’s why I adored it. This place was my Cheers, so it seemed only fitting that it was the last place I visited when our family left Chicago for a new life in California. My husband waited in the loaded-down Honda while I placed a small commemorative plaque and a bouquet of flowers along the fence around the construction site.

This was posted by Shawnee Barton, an artist who keeps a blog on other people’s blogs. If you have a little nook of cyberspace and are open to welcoming a guest poster, please email her at shawneebarton@gmail.com. She will be grateful. To see where she is headed next, check out shawneebarton.com.

Posted by jonathan Gitelson at 11:22 AM

I went to Mondelli's all the way back when Johnny still owned it. I had an office in the 1 East Oak building for a few years. I'd go to the bar and Johnny would buy me a drink and tell me stories about growing up in Italy during World War II.

I moved away for awhile and when I came back, Johnny had passed away and Mondelli's had a new owner named Mike. But it was the same old place - thank God. Some new people, but still the same.

Sure I'd hit Gibson's, Tavern On Rush and the few other "happenin' places" on Rush, but would always end up back at Mondelli's. Mary and Angela worked the bar and were the best bartenders in the area. It truly was the Cheers of Rush street. I moved away again for awhile, and when I returned I was told Mary had a stroke, and that the building was sold and set for demolition. Two body blows that almost knocked me to the barroom floor. I never found out if Mary recovered. I'd love to know.

It's sad to think that when I come back to Chicago, not only is Mondelli's not there, but the whole damn building is gone. Nothing, just a memory.

But a good one.

Reading your comment warmed my heart. It's nice to know that Mondelli's was special to you too.

They just tore the building down so fast. It didn't leave time for a proper good bye. I was hit just as hard as you were when I saw that it was gone. I felt so silly crying over a bar, but it felt like I had lost a good friend.

And you are so right, I've never seen better bar tenders. Those ladies were amazing.

I moved away for awhile and when I came back, Johnny had passed away and Mondelli's had a new owner named Mike. But it was the same old place - thank God. Some new people, but still the same. Building Demolition

Let us know if you have any comments!
payday loan

Nice post. I have been searching for articles about valves and actuators and your post really helps. Thanks a lot for posting this.
outbound call center

What a great post, I actually found it very thought provoking, you just never know sometimes when a golden nugget of information is going to land at your feet, thanks

Socialkik is the #1 place to buy cheap facebook fans, you can also buy twitter followers, youtube views and subscribers and google +1 votes. Try coupon code: STANDARDKIK for $10 off.

I found my way to make money online - www.BreezeAds.com - Get on the board today and start monetizing your website

We used to travel from Michigan to Chicago just to hang out at Mondelli's every weekend for years...Mary and Laura were bartending...We made friends with Arturo (Pump room mainstay) , Andre , Marianne, Bobby , Mike and Sue, Lord Isaac, Rachel, Ira, William F. and SOOOOoooo many others...If you spent any time there in the late 90s until its closing those names will ring a bell...It was such a fun little place and ALWAYS full of characters and itself was a place exuding character...No trendy BS, just a classic locals hang out...We moved to California in 2004 and never made it back...We were so saddened to hear Mondelli's was gone, indeed that the entire block was gone (Papa Milano also missed)...I guess it happens everywhere in time, but it's sad to see such an old school establishment replaced by the faceless modern disposable world of the modern developers (We are going through this in San Francisco everywhere now)...Some may call it improvement, but its truly a great loss that will never be replaced.