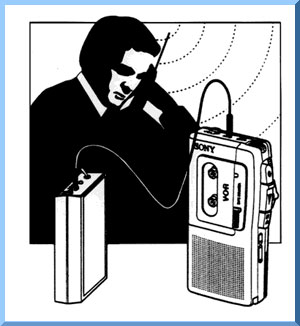 I've lately taken to listening to old episodes of NPR's "This American Life" while I fast forward through the day's garbage can surveillance video. I just listened to an amazing episode that was all about the very essence of the Garbage Can Project. FYI: www.thegarbagecanproject.com should be launched sometime in the next two months.

11/19/04
Episode 278
Stories about amateur spies – regular people who spy on other regular people, and the consequences of their spying.
Prologue.  Host Ira Glass talks to This American Life contributing editor Jack Hitt about the time he hacked into his employer's computer and found out what he didn't want to know. (6 minutes)
Act One. The Lobbyist. When Burt Covit was programming his VCR one day, he accidentally tuned in to a channel showing the lobby of a building. He started to watch, and couldn't stop. Then a mysterious woman appeared, wearing a pill-box hat. Burt told this story on the CBC radio program Wiretap. Jonathan Goldstein, a contributing editor to This American Life, is the host of Wiretap. This story is a work of fiction, staged as a radio interview. (12 minutes)
Song: "Television," Robyn Hitchcock
Act Two. Life With the Haters. Writer Beth Lisick decides to try a new strategy to get her infant to sleep better, and buys a baby monitor as part of the deal. Soon, she's hearing her neighbors make drug dealsover the monitor's frequency. And then she learns some other, more complicated information. (14 1/2 minutes)
Act Three. Mystery Shoppers. They are ordinary people who go undercover in coffee shops and chain stores, spying for The Man. This American Life producer Lisa Pollak reports. (11 1/2 minutes)
Song: "Town With No Secrets," Mark Mallman
Act Four. Stop Bugging Me. What do you do when you think your apartment is being bugged? You call the apartment de-buggers. It's a weird job; still, someone's got to do it. This American Life producer Jane Feltes goes on a counterespionage mission. (10 minutes)
Song: "Spies Like Us," Paul McCartney
Posted by jonathan Gitelson at 12:15 PM