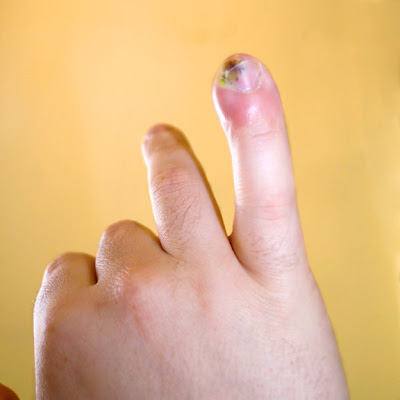 Didn't your mama ever tell you not to chew your finger nails? Well the above photograph is evidence of why she was right. I spent all of this past thursday night watching "The WB" in the Emergency Room at Rush Hospital waiting for a doctor to take a look at my infected pinky finger.

I guess I'm lucky but I've only ever been in the emergency room three times and each time for something completely weird. The first time that I went I was eight or nine years old and had been camping with my family in The Berkshire Mountains. I had a rather severe case of poison ivy and I woke up one morning with webbed hands. Overnight, all of the poison ivy blisters had merged together to form a wall of blister. My parents took me to the ER where they cut the blisters, wrapped my hand and sent me on my way.

The second time that I went to the ER I must have been about twelve or thirteen and like all of the cool kids at school, I had just gotten my right ear pierced. The day after it was pierced I had a baseball game and while I was at bat I had to wear a batting helmet that had hard plastic ear flaps. Needless to say, after three times at bat my ear had become so infected that it swelled up over the earing. After the game I went to the ER where they pulled the earing out through the back of my lobe. My ear is permanently pierced as a result despite the fact that I haven't worn an earing since.

My visit to the ER this past week was perhaps the stupidist visit of all. I injured my hand by chewing on my nails. I'm a chronic nail biter and must have been absentmindedly chewing away when I ripped my pinky nail a bit too far. A few days and a thousand germs later, my pinky swelled up like a beach ball and became discolored and disgusting.

A few days and a few anti-biotics later, the moral of the story is clear: Stop Chewing Your Nails People, Your Mama Was Right!!!!!
Posted by jonathan Gitelson at 7:12 PM

Fuck! That is amazing!

I also chew my nails every second of the day... then I pick my teeth with them. Then I get sick. Then I go on to my toes when the fingers are gone. Really stupid and really addicting. And it can really hurt. My mom always told me woman wouldn't love me if I kept biting my nails. She was right...

as painful and uncomfortable as that looks, i am not sure anything would deter me from continued nail biting.